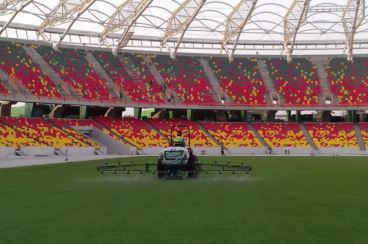 The Confederation of African Football (CAF) met Tuesday to discuss the poor condition of the pitch in Douala and whether Africa Cup of Nations games should be relocated.

So far, Cameroon’s largest city has hosted four games at the Japoma Stadium, with another six on the way.

There will be a semi-final, two quarter-finals, and a last-eight match.

Each of the tournament’s six stadiums has hosted two matches back-to-back on the same day.

Ivorian goalkeeper Badri Ali Sangare was caught off guard when he appeared to lose his footing while attempting to smother the ball to prevent it from going for a corner, only to fumble it into the path of the gleeful Alhaji Kamara.

Even so, the forward from Denmark had to recover from his own slip on the surface before putting the ball in the open goal.

Later that evening, in a scrappy match, defending champions Algeria were defeated 1-0 by Equatorial Guinea.

Algeria coach Djamel Belmadi, whose team has played both games on the pitch so far, has criticized the playing surface since the first day games were played on it.

“I’m not saying it’s catastrophic, but it’s not at a level that would allow total fluidity and what we expect for big tournaments like the Nations Cup,” Belmadi told BBC Sport Africa ahead of their 0-1 loss to Equatorial Guinea in their second group game.

Algeria face Ivory Coast in their final group game on Thursday at 5 p.m. in Douala, with the Desert Foxes needing a win to advance to the last 16.

The Japoma Stadium opened in late 2020 and was first used in January 2021 when Cameroon hosted the African Nations Championship, a tournament for African footballers based in their own domestic leagues.