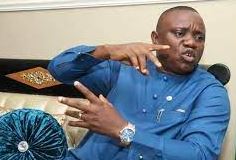 As the political clock ticks to the forthcoming PDP primary elections, the member representing Ibesikpo Asutan State Constituency in the Akwa Ibom State House of Assembly, Rt Hon (Elder) Aniekan Uko, has thrown his hat in the ring and officially announced his intention to represent Uyo/Uruan/Ibesikpo Asutan/Nsit Atai Federal Constituency in the House of Representatives.

The lawmaker who is popularly called ‘IboroAkam’ declared his intention on Wednesday in Uyo at a massive event attended by delegates in the four LGAs.

Uko, who cut his teeth in politics as a Special Adviser in Ibesikpo Asutan LGA before he became Councillor in Ibesikpo Ward 1, underscored the need to seek the consent of the delegates, saying they were central to realizing his ambition.

The former State Organizing Secretary of PDP said he knew the challenges inherent in the Federal constituency, assuring that they would be tackled with their cooperation.

His words: “I am not a novice in this business. I joined politics in 1999 as a voter. By God’s grace, I have been a Special Adviser and from there God elevated me to become a councilor in the biggest ward in my local government. I did not stop there, I later became the State organizing Secretary of the PDP, from there, I resigned to contest the House of Assembly election and through your support and votes, I was elected member representing Ibesikpo Asutan State Constituency. While in the House, God used the Governor, my colleagues, and your collective prayers and I became the Speaker of the State House of Assembly as a first-timer. It didn’t end there as I became the Secretary among all the Speakers in the Country. My dear people, I am a child of destiny, I broke the jinx in my constituency and I was re-elected to the House of Assembly,” he stated.

Continuing, the aspirant added: “Today, I am overwhelmed by your support across the 4 Local Government Areas and what spurs me is that, you keep saying, ‘Iboroakam, you have done well,  that I should prepare for the House of Reps assignment.”

Rt Hon Uko used the occasion to bring the stakeholders up-to-speed with his achievements in the House of Assembly. Hear him: “I have co-sponsored over 150 bills. In terms of oversight, thank God all of us are on social media and are enlightened. I have done my best in assessing what the Executive arm has done and I can tell you today that our dear Governor, His Excellency, Mr. Udom Emmanuel is the best, his achievements are superlative, he means well for us and thus deserves our collective support.

“In representation, you will agree that I have not disappointed my people. At the last count, I gave 14 brand new cars including 2 SUVs to aid the movements of our people. Just last December, I made 15 Millionaires, please I wouldn’t want to use this event to praise myself because you know already what God has used me to do for our people. If I can count 10 million Naira, let my supporters count at least 1 million and I can assure every so and daughter of Atai Uyo that I will give effective representation.

He pledged unflinching support towards the actualization of the Governor’s completion/succession agenda. He commended his achievements, maintaining that the governor is a pride to the State and the People’s Democratic Party, PDP.

“On this note, I am here to announce that I, Aniekan Nyong Uko, from Mbikpong Ikot Edim in Ibesikpo Asutan Local Government Area of Akwa Ibom State, has presented myself to you to send me to represent you at the House of Representatives. To God be the glory.”