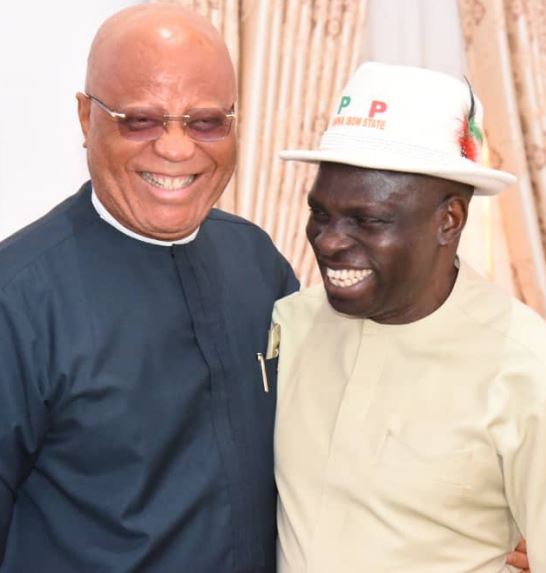 Pastor Umo Eno, the PDP’s leading aspirant in Akwa Ibom State, has met with the State Chairman of the Peoples Democratic Party (PDP), Hon. Aniekan Akpan, to seek his support and blessings for success in the party’s upcoming Guber primaries.

Pastor Umo Eno, who was accompanied by the cream of the party’s bigwigs, stated that he was at the Chairman’s residence to pay his respects and to solicit his support ahead of the primaries and election.

He thanked the Party Chairman for welcoming his team and for his fatherly role in the party which he said kept the party even stronger and more united.

According to him, “I came to hand over myself to you and to tell you that I am in the race for the 2023 governorship and to ask for your blessings.

His Excellency, our Governor, has worked tirelessly to bring the state to its current position, which must be expanded by connecting the dots to create more jobs.”

Pastor Umo Eno commended Governor Udom Emmanuel for his selfless interest in the development of Akwa Ibom State and for expressing a preference in him as his successor, and he thanked every member of his team for their confidence and support, assuring the Akwa Ibom people that he will not disappoint them.

Speaking earlier, the Director-General of the Umo Eno Campaign Organization, Chief Assam Assam, SAN, told the party Chairman that he came with a good product for the State which according to him, will further the industrialization agenda of Governor Udom Emmanuel and appealed to the State Party Chairman to accept Pastor Umo Eno and take him as his own in the 2023 governorship election.

Barr Emmanuel Enoidem, the International Coordinator of the Maintain Peace Movement (MPM), also spoke, saying, “We as members of the party, partisan members, and MPM members have come to tell you that we stand by Pastor Umo Eno as our candidate.”

Pst Umo Eno is a proper product for the party and we will stand by him to ensure victory.

He commended the Party Chairman for being a frontline supporter of MPM and assured him that MPM will stand by him to ensure victory for the party come 2023.

Senator Effiong Bob, the political leader of Nsit Ubium, reminded the Chairman of their earliEr discussion, emphasizing that he has withdrawn from the race and requested that the blessings be transferred to Pastor Umo Eno for success in the 2023 governorship election.

In response, the State Party Chairman, Rt Hon (Elder) Aniekan Akpan, welcomed Pastor Umo Eno’s delegation and assured him that the party is still intact, emphasizing that victory in the 2023 election is not negotiable.

He maintained that irrespective of a few dissenting views, the will of God stands sure, stressing that he has received Pastor Umo Eno with open arms.

He expressed gratitude to the team for the consultation visit and prayed that God would guide them through the process.