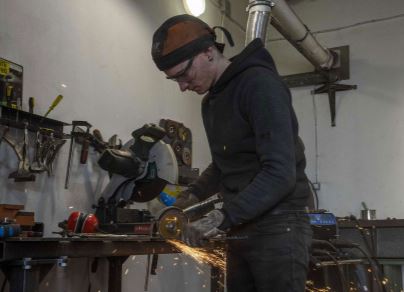 Workers in a welding factory in Lviv, Ukraine’s western metropolis, were fitting steel plates to a donated pickup truck so that it could be driven to the front by a volunteer.

“Our victory is in our hands,” said Ostap Datsenko, a welder who is part of a massive volunteer effort in Ukraine’s resistance, which has received backing from the diaspora.

But he hadn’t anticipated seeing so much of the battle, or its shrapnel, so quickly.

He was standing atop the truck, rushing to finish the job before dark Saturday, when he heard a commotion and looked up to see something flying through the air.

“It was rather enormous,” he added, “but I’ve never seen rockets before.”

“Then there was a massive explosion,” says the narrator.

The Russian airstrike hit a military-connected plant, and the blast knocked Datsenko out.

He dashed inside the makeshift bunker in the grease pit of the garage, dazed.

He was back at work the next day, putting the finishing touches on the truck before it was driven to eastern Ukraine with three other trucks on Monday.

The camouflage paint job on the truck was finished.

Welders added back bars to assist support a machine gun.

Datsenko, 31, claimed he was ready to battle like other Ukrainian guys, despite his clothes being smeared with grease.

However, he lacked fighting experience, implying that his time has yet to come.

On several fronts, Ukraine’s military seemed to have fought Russia’s considerably larger army to a stalemate, surprising many observers.

A parallel army of volunteers, which is busy organizing financing and supplies ranging from body armor to cigarettes, is one of Ukraine’s weapons.

Others notice the military ties.

The welding shop in Lviv, which had been relatively removed from the war before Saturday’s airstrikes, sought methods to aid.

It began by producing “hedgehogs,” which are metal barriers used at checkpoints and around sensitive sites.

Then they heard an automobile summons.

“Any vehicle” is in high demand on the front lines, according to Artem Pastushyna, a 27-year-old welder with metal nuts glinting in his earlobes.

“Many European cars are driven straight to the front lines,” Pastushnya explained.

The truck was the welding shop’s first vehicle adaptation, he said, and he expects they’ll undertake many more.

Until then, following Saturday’s bombing, the welding firm is taking extra attention to its grease pit.

They had anticipated an attack at some point, but not one of this magnitude, according to Datsenko.

An empty pizza box in the pit-turned-bunker, which was accessed by a wooden ladder, indicated that the workers had spent more time there than usual.

“It was just a basement until yesterday,” Datsenko remarked.

“Now we see that having more goods there is a good idea.”